Since the beginning of fishing time, I believe man has used some kind of float, cork, bobber, indicator, waggler, or whatever you care to call it. There are so many ways to use one, and so many slight. variations, that it made my head hurt trying to organize them for this article. What I came up with is what I commonly use and why it seems to work better than the options. By no means is this all a man could use in a given situation, please keep that in mind. 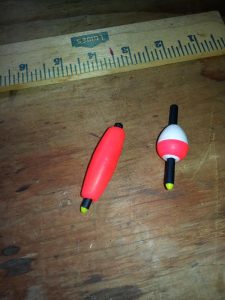 This is probably one of the most popular, productive use of a float, especially to the beginner. Simple by design with some advantages. All that is needed is about any rod you can lay your hands on, with fairly light line, a float of choice, a few split shot and a hook. Keep in mind that the heavier the line, the more stuff you have to put on the line to cast it. The float here needs to be just enough to stay above water. The split shot. will keep the line from the float to the shot pretty straight with the hook somewhere about 6” to a foot below the shot. This gives the fish a few seconds to hold the minnow in it’s mouth without feeling the angler. A slight dip of the float might happen when the fish takes it, but not always so you have to be on your toes. A float too large won’t react at all until it takes off, which some never do. For this reason I like to use a lead jig head on the end of the line and not shot. This way I see the float move every time it is touched, much more sensitive. When I do this, I prefer a stick float matched to the weight I’m using. These look like a 6” stick stuck through a bulb, some times foam or balsa, and mostly attach at one end. With this float I see the tip of the stick move every time a fish breathes on it, and should they come from beneath and bite it and not run(something they are famous for), the float will lay over. Set the hook. When the float and weight are separated they can be tough to cast. I’d like to give you some magic answer but I don’t know of one. Time on the water and practice will help you figure it out. I also like the ability of changing depth quickly with a float. Finding the right depth can sometimes be an important factor. Two hooks on the line, usually one above and the other below the weight, is productive as well. 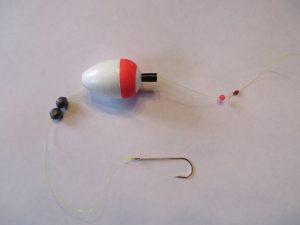 This is a variation of the stick float mentioned earlier. In this case, the stick is a hollow tube that has the line threaded through it. First on the line is a stop. Many different kinds to choose from, I prefer the small rubber oval  and small plastic bead that come ready to go on the line. Then the float, and then the weight and hook or jig head. This is easier to cast because the float slides down to the jig or weight and is cast as a smaller package. The weight pulls the offering down to the stop once it lands. Changing depth is done by simply moving the stop up and down the line. I have used these as deep as 8’. Paying attention to the time it takes for the weight to hit bottom helps to see a strike when you know it should be down and the line is slack or the float hasn’t stood up. This is a lot of fun when the fishing is hot. 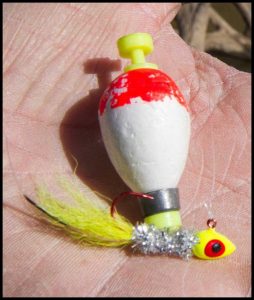 The Jig and Cork

Both of the techniques I’ve already spoken of don’t have to be used with live bait. In fact, I always use a jig (plastic or hand tied) on the end of my line. With the float fixed I get a fall of the bait like a pendulum and then it rests. Lots of fish are caught while the jig falls. Then as it sits a while, I’ll get the line just tight enough to be in touch with the float and shake the rod tip, causing the jig to vibrate or dance a little. I have also waited for it to settle and pulled hard a foot or so, making the jig jump and fall again as it did when first cast. A friend showed me this a lot of years ago, and said that wouldn’t work. After he put 7 good crappie in the live well to my one by casting and retrieve, I was looking for a float like his. Then it was game on. I’ve also used two smaller jigs tied at different depths like this, but I don’t advise using it when close to brush or snags.

This is usually done at lower speed than most trolling. The trick is to get the offering away from the boat a bit while achieving good depth control. Keeping the baits separated a bit helps to keep tangles to a minimum. This allows you to cover water early in the day to locate fish, throw a marker, and turn back into them for a few more. I’ve also seen this done with double offerings, sometimes mixed jigs and minnows. This can really fill a cooler sometimes.

Thanks for taking the time to read this, and I hope it helps put a few more fish in the cooler for you. Getting back to the basics like this is something we all do from time to time.  Have fun with it…..Tim Reinhart (aka Skeetbum on the Crappie.com fishing forum)

Spider Rigging How To Guide

Night Stalking for Crappie by Rango 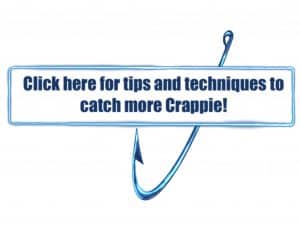